Located in the Western Australian suburb of Halls Head, the commercial centre offers prime 150sqm-1,500sqm large format and retail tenancies for lease within the regions well-established and growing retail precinct.

LOCATE YOUR BUSINESS IN
THE CENTRE OF THE ACTION

Part of the City of Mandurah municipality, the Halls Head Commercial Centre is approximately 68km south of the Perth CBD, and 2.5km south-west of the Mandurah CBD.

Located in an active retail and trade precinct, the new commercial centre extends the current retail offerings in this growing region. 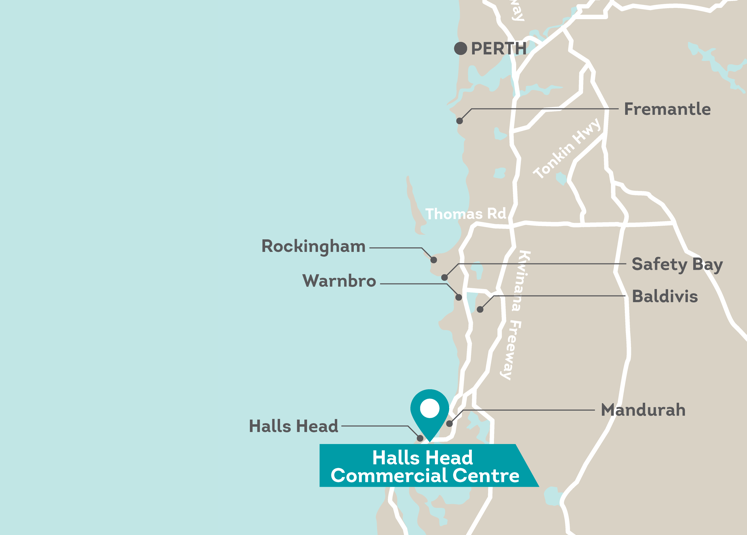 Perfectly positioned, the Halls Head Commercial Centre has been developed to meet the growing needs of the area.

The new development is attracting a mix of tenants from local, state and national retailers looking to upgrade or establish a presence in this fast growing region and tap into the under-serviced large format retail market.

CO-LOCATE WITH ESTABLISHED COMMERCIAL RETAILERS IN A GROWING REGION

Situated next to the established Halls Head Central Shopping Centre, the complex is surrounded by national brands including Bunnings, Coles, Kmart, Aldi, Farmer Jack’s and a number of speciality retailers.

About the Halls Head Region

The City of Mandurah, including Halls Head, has generated sound population growth and extensive new residential development in recent years. This growth has been aided by affordable housing in the area, its coastal lifestyle and good transport connections to the Perth CBD, including the Kwinana Freeway and metropolitan railway line.

The Halls Head Commercial Centre will draw patronage from its immediate and surrounding areas.

With major anchor tenants Bunnings, Coles, Kmart, Aldi and Farmer Jack’s located next door, the Halls Head Commercial Centre will enable the retail precinct to grow, support and benefit from one another.

It will also provide a convenient marketplace, improved price point competitiveness on goods and services between retailers and offer a significant economic investment and development opportunity for private investors.

Halls Head is within a demographically diverse market dominated by an older population, young families, and coastal pockets of affluent residents. The Halls Head population also has a higher proportion than Perth of fully owned homes across all catchment areas.

A total of 1,002 new dwellings have been approved within the catchment area over the two years to June 2018. Future residential development is planned for multiple sites within proximity of the centre, including the parcels of land directly adjacent to the north of the centre as well as the vacant land across Old Coast Road.

Retailers at the Halls Head Commercial Centre can expect the annual large format catchment spend to grow by $95.9 million – at an average rate of 4.4% per annum – over the next nine years.

To register your interest in leasing a tenancy submit the below form and contact:

Disclaimer: Cape Bouvard has made every effort to ensure an accurate lot plan and information has been produced. However, under some circumstances dimensions may be subject to survey and change. The particulars on this website are supplied for information purposes only and the Vendor, its staff and agents accept no responsibility for the accuracy thereof. The appropriate authorities should be consulted for information concerning any service which may be contained within any lot and any building restrictions which may apply. The landscaping and images depicted is indicative only and is subject to local authority approval.